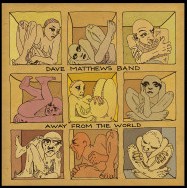 The new Dave Matthews Band studio album, Away From The World, will be released on September 11th in CD, digital and vinyl formats. The album was recorded with Steve Lillywhite, who produced the band’s first three studio albums – Under The Table And Dreaming, Crash and Before These Crowded Streets. The pre-order is now underway in the Official DMB Store and includes a free 5 track bonus disc of new songs recorded live on DMB’s 2012 Summer Tour. Also available are deluxe and super deluxe versions of the album.